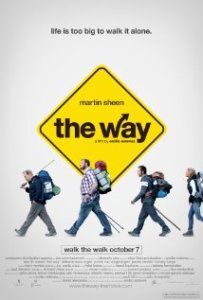 When I was in private practice in 2010, I recall my boss encouraging me to watch a movie called “The Way” starring Martin Sheen and directed/written by his son, Emilio Estevez.  I had developed a strong work relationship with my boss to that point, and so was intrigued when he recommended that I check out this movie.  The thing is, I never found the time to watch it until this past weekend, nearly 4 years later.  It happened to be one of the movies that was recommended to me on Netflix.  Boy was I glad I took the time to soak in this film.  I understand now why my boss suggested it to me.  It’s a movie that I would encourage everyone to see, not because it’s another “feel-good” movie, but because it’s a movie about the importance of mindfulness.  Yes, mindfulness.  Allow me to explain why.

When we first encounter Dr. Tom (played by Sheen), an over-worked opthamologist who plays the main protagonist in the movie, it isn’t immediately clear to the audience that his life is about to change forever when he receives a phone call on the golf course  from French authorities.  The authorities tell Tom that his son, Daniel (played by Estevez), has passed away while travelling the “El camino de Santiago” – a historic pilgrimage from France that leads “the way” to the tomb of St. James in Santiago de Compostela, Spain.

We see Dr. Tom, frozen; unable to process this news of his son’s death.  In the midst of his busy medical clinic, all Tom can replay in his mind is the disagreement he had in the car while driving Daniel to the airport, accusing him of throwing his life away.  Most of us, I suspect, have experienced a similar exchange like this with our parents at one time or another.  This was Tom’s last communication with his son.

We see Tom quickly descend into a person of self-contained grief as he travels overseas to identify his son’s body at the morgue in a tiny French seaside town.  What he does not know is that his son, Daniel, was only just beginning his journey on the “Camino” – the “Way” – and that it is here that Tom is encouraged by the senior French police officer to embark on his own journey on the Camino.  At first, Tom resists the idea – but, after some reflection – he decides in that moment that the best way he can honour the memory of Daniel is to finish what he had started.  In that moment, we see Tom forget the past, the future, and focus only on the road that lay ahead of him.  He asks that his son’s remains be cremated.  He does so because his wish is to complete the Camino with his son at his side. This is another example of Tom’s unravelling from the past and the future.  He is living only for the present moment, honouring his son Daniel on a journey that has yet to commence.

As Tom embarks on the Camino, he is met by several fellow pilgrim-travellers – one from Canada, one from Holland, and another from Ireland.  We learn that each of these pilgrims are on their own journey of self-discovery.  Each of these individuals accompany Tom during periods of great happiness and sorrow along the Camino. In many ways, I see these pilgrims as guardian angels who are placed in Tom’s path to help physically guide him to the end of the Camino where Tom will ultimately scatter Daniel’s ashes out into the Pacific Ocean.

On reflection, I believe that Tom’s visions of his son Daniel at these precise moments represent a tangible manifestation of the practice of mindfulness.

You see, at first, Tom is reluctant to befriend anyone along the Camino.  He believes he can accomplish this task of walking from France to Spain without talking to or associating with anyone.  For Tom, getting to the Pacific Ocean is deeply personal matter.  He should not have to explain to anyone that his dead son is the reason why he is doing what he is doing. Yet, we come to see that Tom’s approach of avoidance, estrangement and rejection is self-destructive.  Tom does not know how to grieve the death of his son because his focus is on the past – in other words, he is overwhelmed by the manner in which his relationship with Daniel was left unsettled.

Now, here’s where I come back to say something about mindfulness.  It occurred to me that at certain times along the Camino, Tom actually sees his son Daniel with him in his surroundings – on one occasion he is sitting with his fellow pilgrims imbibing over wine, and in another scene he witnesses Daniel inside the Church dressed as a young Catholic monk assisting his brothers with one of the rituals during the Liturgy.   What do these images of Daniel mean to Tom, and what do they have to do with mindfulness?

On reflection, I believe that Tom’s visions of his son Daniel at these precise moments represent a tangible manifestation of the practice of mindfulness.  In these moments that Tom sees his son Daniel, he sees nothing else. Not the past. Not the future. Only the here and the now.  There is no guilt, no remorse, no sorrow in this moment.

There are those who have suggested that mindfulness can be encapsulated in three words: attention, intention and attitude.

As we see Tom at the beginning of his journey to the moment he breathes the Pacific Ocean in and scatters his son’s ashes into the water, we see a man, a father, transformed through a journey of mindfulness expressed through a focus on attention to his emotions and surroundings, an intention to focus on the present, and an attitude of openness to the people and things placed along his path.

Perhaps the greatest lesson that I have taken away from this film is how important it is for us to recognize that each one of us is walking now on our own Camino, our own Way. And we are not alone. It is our task to ensure that we not only implement a practice of mindfulness focused on cultivating our attention, intention and attitude on the here and the now, but share that practice with those who are the most precious to us in our lives.

Now, I wonder whether Emilio had mindfulness in mind when he wrote The Way…

One day, I will travel the Camino. I have made this promise to myself. Until then, I wish you all love, happiness and peace.

For more information on the movie “The Way”, please visit this link: http://www.imdb.com/title/tt1441912/

Check out this fantastic short film showcasing the Camino by David Faddis:

And for more info on The Camino de Santiago, please visit this link: http://www.santiago-compostela.net/